Famous Renaissance Paintings Are Even More Surreal as Modern Photos

What do you think about when you hear the term “Renaissance”? Most likely, you will connect it with the rebirth of interest in everything connected with a human in general, and with the human body in particular. It is the time when religion was moved to the second plan, and humanism came to perform on the stage.

Renaissance in paintings and sculpture demonstrates this trend visually. In the paintings, you see people, a lot of people. They might be painted in groups or individually, every part of the human body is recreated in Renaissance paintings with the utmost care and attention as if it were the top treasure. And indeed, at that time, it was.

all the above-said is the truth, isn’t it? However, let us have a loot at the Renaissance oil on canvas at a slightly different angle. What kind of people do you see there? They are healthy, strong, and… they are the representatives of the so-called white race. If you see a character that is either from a different race or is sick, you immediately perceive him/her as “different”, as somebody that doesn’t fit into the total celebration of beauty and life.

Women have more rights nowadays than they had during the Renaissance period;

Disabilities aren’t perceived as something “not belonging to…”;

Being a white race representative isn’t a priority anymore;

Gender roles have changed and, in some cases, overlapped and merged.

Now, let us have a look at how some famous paintings can be modified to fit into modern society. 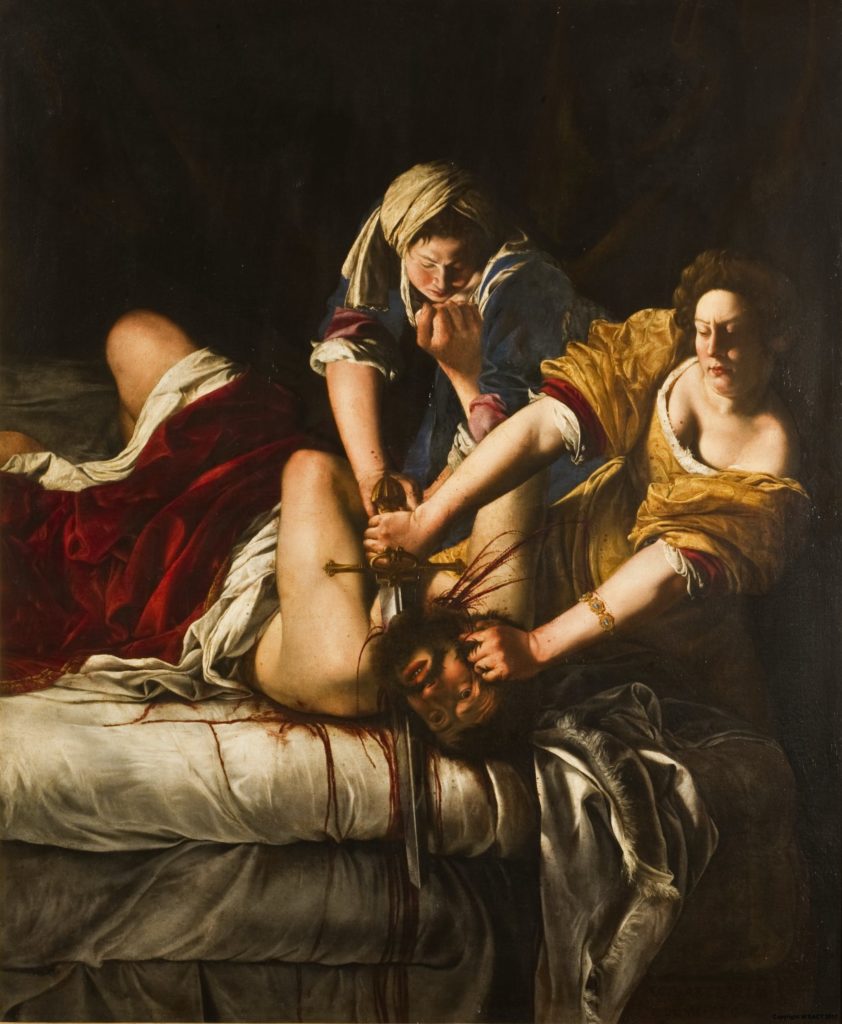 This painting is one of the iconic works of a young artist. Artemisia was known for painting strong women but this painting is something different. Some critics believe that it was some kind of visual revenge to Agostino Tassi, a painter, who had raped Artemisia. In the picture, she is actually the Jewish heroine Judith, and the abuser is Holofernes. Artemisia used all the power of shades, those dark and clear transitions to accentuate the beautiful though the powerful face of Judith and the rough shape of Holofernes.

Now, what could you change in the painting to adjust it to modern society?

Let us remind you who Judith is. She is a beautiful Jewish woman who enchants the Assyrian general and kills him.

So, here, we see not just a conflict between genders but rather racial and social conflict. The Assyrian general is the embodiment of violence, rude force, and lust. And he is a representative of a darker-skinned Assyrian nation. His target is Israel, but the refined gentle Judith stops him. The skin of Judith is white. You can even see the difference in the painting even though one half of Judith`s face is covered with a dark shade.

Now, let us think about how this painting can be adjusted to modern sociocultural reality. First of all, we eliminate racial discrimination. Thus, all the characters shall have the same skin colour, let it be white though. Gender discrimination is not to place here, too. Thus, what about replacing Holofernes with a woman? Just these two elements change the picture and its entire sense completely.

Allegory of Justice by Giorgio Vasari 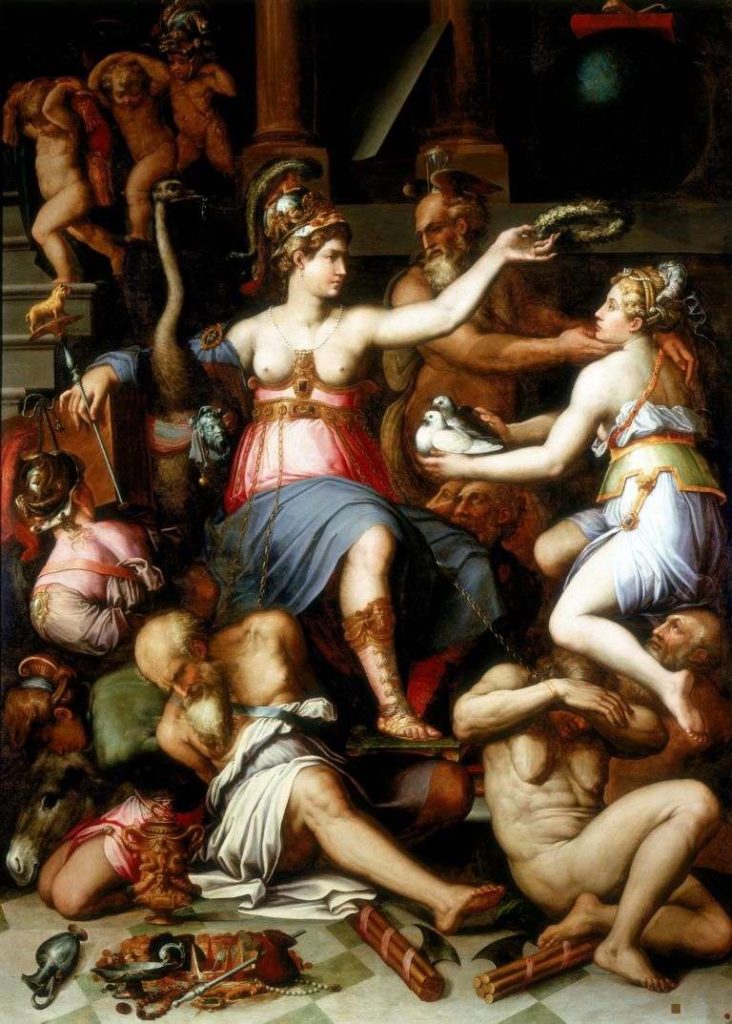 Allegory of Justice is a masterpiece from the point of view of art and symbolism. The word “allegory” is the keyword in the painting name. As Vasari used to tell, a painting is full of symbols. The beautiful lady with pigeons is the Truth, she is presented to Justice by Time, an older man behind both of them. Thus, the Truth is always revealed with Time.

You might feel sorry with an old white-bearded man kneeling by the feet of Justice. Don’t worry though. He represents Corruption and right now, he is focused on some valuables scattered on the floor. Corruption is not interested in Justice, it is interested in money.

The Truth is practically standing on two characters – those are Falsehood and Slander. They are crushed by the weight of the Truth.

What about the modern image of Justice? It has changed pretty much, hasn’t it? Instead of pigeons, a symbol of innocence, the money shall be painted. A dark band hides the eyes of the Justice. The vices are not under her feet, they are flourishing. Can you imagine the new Justice now?

Venus of Urbino by Titian 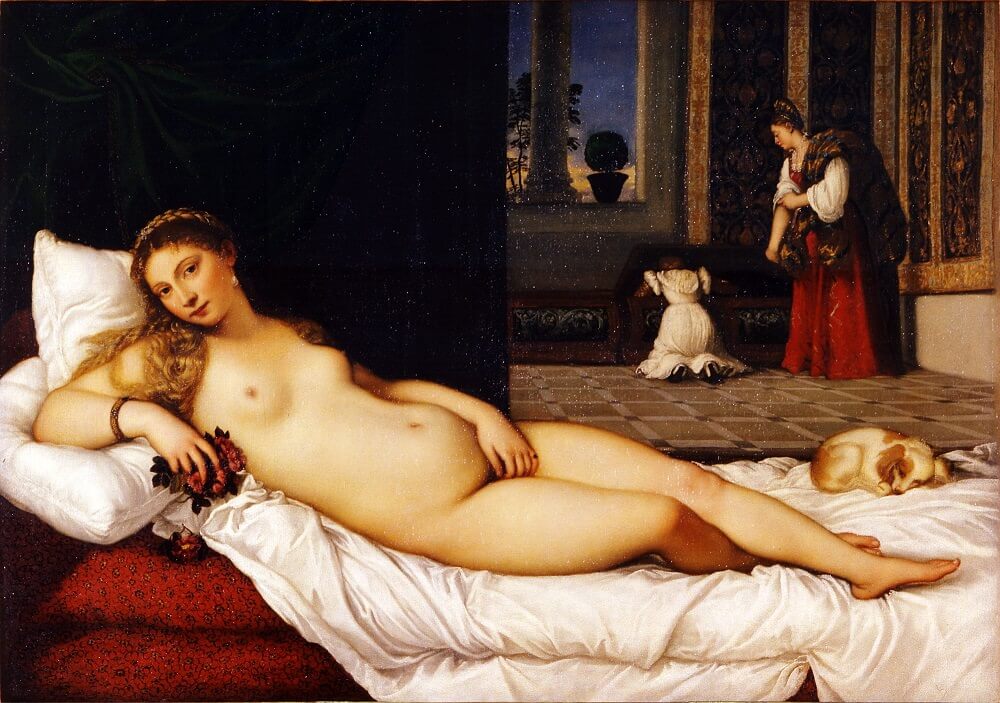 One more picture is worth attention not just because it has been admired for centuries as one of the most refined art creations but because of its controversy. The women painted during the Renaissance period are refined, with a fair complexion, rounded but not rough shape. The woman in the famous painting complies with most requirements. She is the embodiment of perfection as the Renaissance would understand it.

In the context of the modern world, we would replace it with a plump or even fatty lady. Yep, being body-positive is one of the most advanced trends, you know. Now, replace the fair texture with a refined colour of dark skin, and the new interpretation of an old painting is ready!

Thus, what about choosing the most famous Renaissance paintings, finding out what is behind them, and trying to experiment by eliminating the stereotypes? We bet you will find out many interesting things! 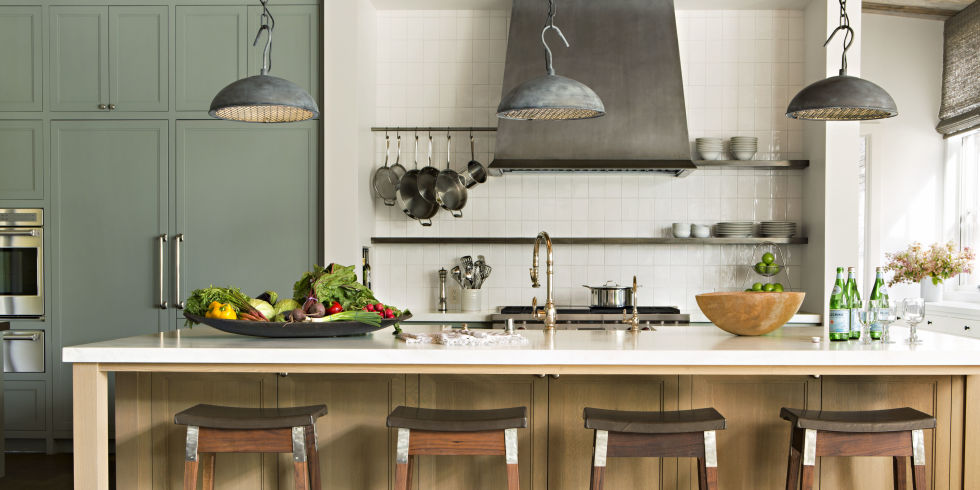 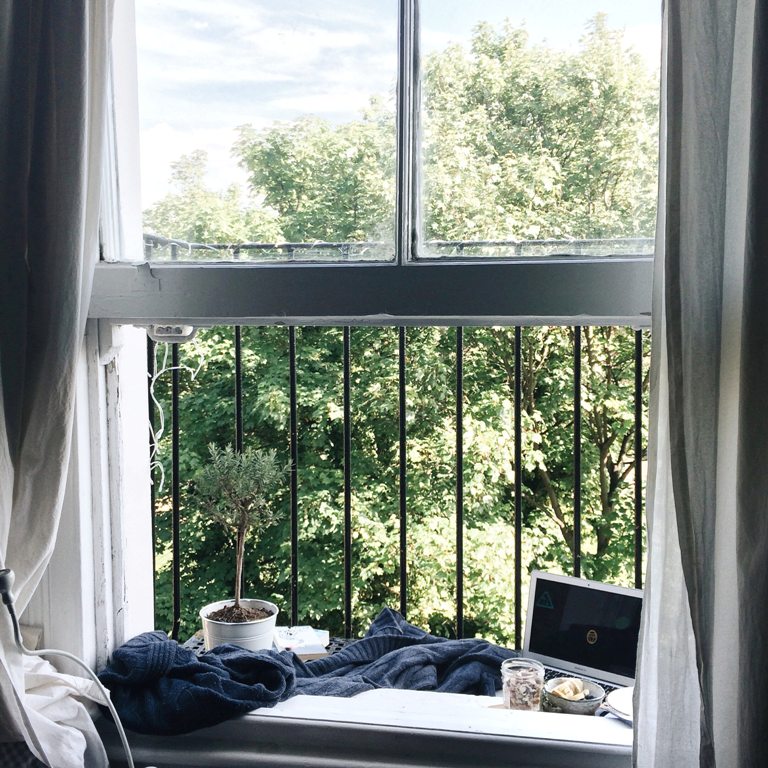